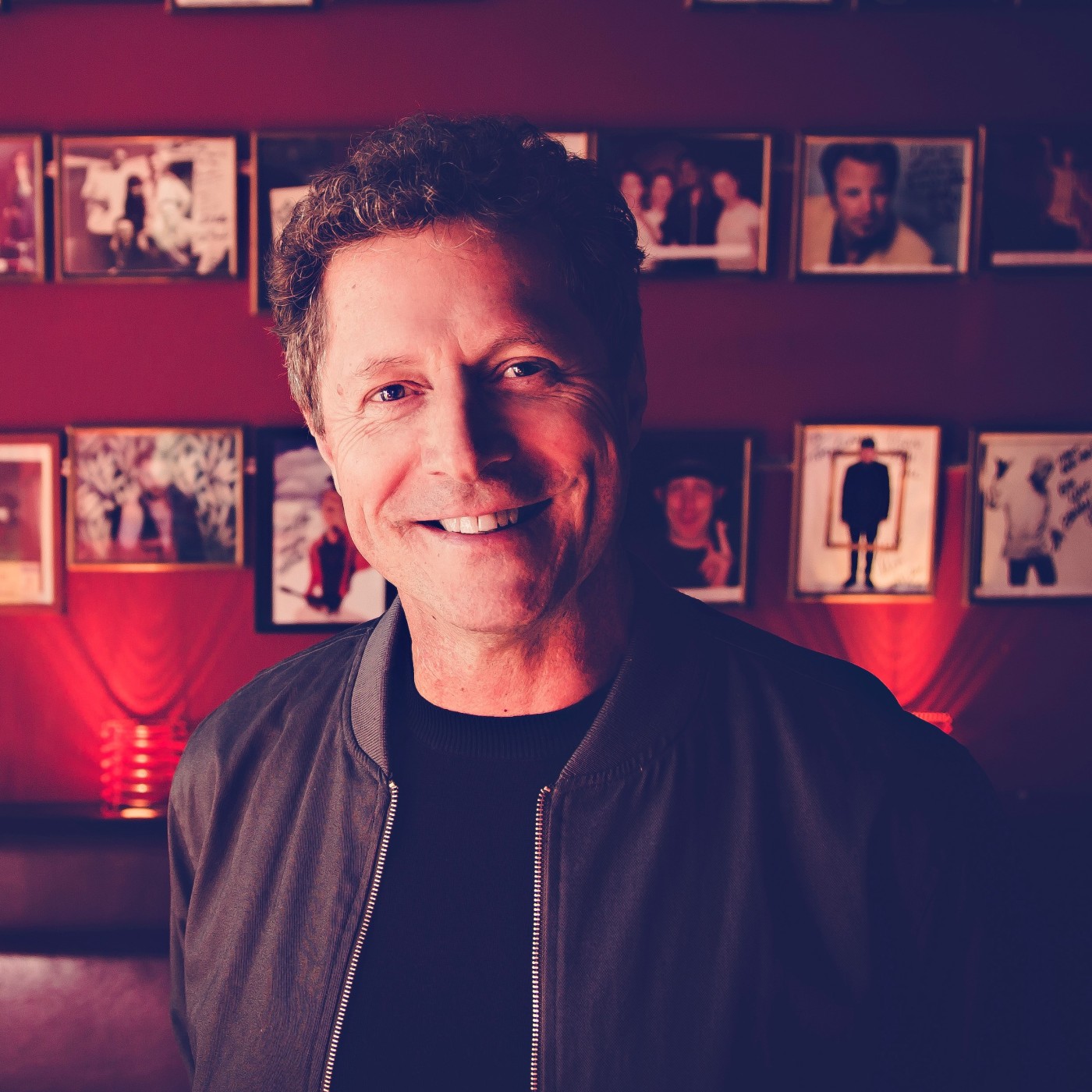 Known as the Godfather of comedy in New Zealand and owner of Auckland’s iconic comedy club The Classic, Scott Blanks discusses the rise of Kiwi comics, overcoming humankind’s greatest fear and the future of funny.

Scott was always drawn to the funnier side of life. Whilst most kids his age were listening to Bowie or Led Zeppelin, Scott’s first album was Fred Dagg’s Greatest Hits.

His sense of humour was heavily influenced by the likes of Monty Python, The Young Ones and The Goodies along with comedians such as Billy Connolly, Rowan Atkinson and Alexei Sayle.

As an adult, Scott and some friends began a sketch group called Funny Business which became the first of its kind in New Zealand.

“I thought we were starting a Monty Python kind of troupe but we soon discovered that putting on a sketch show has difficulties in that you have to be able to get from one sketch to the next with dead air in between. So each person in the group developed a sort of alter ego for stand up comedy and performed stand up in between sketches. Funnily enough that was the first bit of solo stand up we did.”

Eight years later the Funny Business crew met up with another group to form a super group for Comedy Fest. They needed someone to take care of the admin, promotion, marketing and scheduling and asked if Scott was up to the task. It was a challenge he happily accepted and that was the start of his important behind-the-scenes work in the comedy world.

“That was the beginning of a whole new generation of comedy in New Zealand which got bigger and bigger,” says Scott.

Five years later The Classic opened out of an adult cinema on Queen Street. At the time Scott and his friends were producing three or four nights of comedy a week and they decided to focus it all in one venue.

“We could see that the scale of operation could be greater but it required investment. It felt absolutely natural. No one had any doubts including the people who invested in the club. It’s very easy to collectively do great things when no single person is sharing the burden of the decisions and also the burden of it going wrong.”

Of course opening a club such as The Classic was never going to be easy and the team inevitably faced some challenges which they worked their way through.

In the meantime they had created a groundswell of interest in comedy throughout New Zealand and Scott has seen the comedy scene change drastically from being something only seen on television, to being something enjoyed at a number of clubs and bars in most major cities across the country.

“We were teaching people to be funny and we were also teaching people how to laugh at funny,” Scott said. “We were educating audiences about all the different styles of comedy.The first thing we had to do was educate them that Kiwi’s were funny because so often people would have doubts. And boy, that took about 10 years. We also had to educate audiences that women were funny.”

For many, Scott is living the dream. He earns a living from laughing. You might think the excitement would fade after a while, but he says that’s the great thing about stand up comedy; there’s never any shortage of new material.

“I have such a great job because I don’t have to go very far to have a laugh,” says Scott. “I watch comedy all the time and I’m constantly laughing.

“You don’t often laugh a lot at the same jokes again and again. You can, but that’s a very in industry thing. Brendhan Lovegrove has been a comedian working with me for 24 years and I know a lot of his material but he sometimes generates new material as well. I love sitting in when he’s performing knowing exactly what he’s about to do before the audience does. I get a huge amount of pleasure seeing the joke released and watching the effect it has on the audience.

“Equally I get a huge kick when it doesn’t work. When you know exactly what the punchline is and you know it’s coming and then it’s delivered but it doesn’t work. Something goes wrong. The timing of it is wrong or something happens to the audience focus and it dies. You can see the comedian on stage have a real ‘wtf!?’ moment but a good comedian doesn’t show that. A good comedian carries on as though nothing has happened.

“Unfortunately my solo laugh is notorious because everyone can hear it, including the comedian. They know that if I’m the only one laughing then something has gone wrong. Sometimes I can’t help myself. Of course I won’t laugh if I know it’s too painful but usually the comedian I’m laughing at has got a thick enough skin to walk away from that moment without any scars at all.

“When we talk about it afterwards and they’ll often ask me, what do you think went wrong? I can normally tell them exactly what went wrong. It can be something as simple as someone dropping a glass in the bar just as they delivered the punchline.”

Of course with this job Scott acknowledges he is in a position of trust and his feedback must come with honesty and tactfulness.

“Some people are very vulnerable when they are learning to be a comedy act. I have to be very careful that I’m not blasé about that process. I’ll usually reserve judgements until I’ve seen them do about 10 gigs and then I can get a better average.

“There’s an early stage that shows where people are going called ‘knowing’. When someone is ‘knowing’ it means they have found the ability to stand outside themselves when they are performing and become a sort of self director and self critic. You know exactly which bits are funny. Some people are ‘knowing’ very quickly and others not so much.

“Comedian Ben Hurley has a famous statement which I often say to other comedians – when you walk on stage don’t ask the audience if you’re funny. Tell them you’re funny. There’s a big difference. Audiences don’t like to be asked. That makes them uneasy and cringe a bit.

“It’s purely an attitude. Before you’ve even said something you need to think about what you’re wearing, what you do with your mic stand. When you walk out, the microphone and the stand are your friend and your foe. It’s very hard for people to walk out on stage and not start talking straight away. To do that shows a huge amount of confidence and control. When you’re not worried about silence, the audience won’t be worried about silence.”

Something else Scott has learnt during his time in the industry is that New Zealanders predominantly have a fondness for narrative based comedy.

“If you look at the Flight of the Conchords, they tell stories in their songs. Rhys Darby tells long convoluted stories about his life and a life of fantasy. Observational narrative storytelling is another style that is very popular.

“That observational style is prevalent in most of our successful local comedians. Dai Henwood tells great stories and New Zealanders love that. It’s almost what you’d call friendly pub style humour. You would sit around a table with a beer and your mates telling a story as opposed to setting them up. It’s very much the Kiwi way.

“You could argue that it harks back to the art of storytelling and oral history in Maori culture. Folk comedy like Billy Connolly is also a big influence. He’s your ultimate storytelling comedian and he’s the biggest selling comedian in New Zealand.”

One piece of advice Scott gives to anyone who wants to give comedy a go is to just get in front of an audience.

“Don’t think about it too much. Don’t over prepare. Don’t lock yourself into a preconception of what a comedian is like. Go on stage and be as truthful as possible. Make yourself vulnerable for the audience. New Zealanders love an underdog. You often get people going ‘You can do it!’ If you were in a club in the UK someone would be yelling ‘Fuck off! Get off the stage!’

“The truth is always the best place to start. Tell your stories. Pretend you’re down the pub with your friends sitting at a table. It’s the best place to be. If you can tell your story to six mates sitting around the table, all you’ve got to do is transfer that to the stage with a microphone. I say that’s all you’ve got to do – that’s a lot to do! Humankind’s greatest fear is public speaking over death. So people would rather die than speak in front of a live audience.

“As soon as you step on that stage and start talking in front of an audience you are in the process of overcoming human kinds greatest fear. Theoretically after this point you can do anything. That’s one of the things I love the most.

“I love seeing new people doing that, making those first steps. As clumsy as some of them are, the great thing about our Monday night audiences is that we set their expectations at zero so everything after is a bonus. We often have a good MC or someone who is practising being an MC and they will provide the $5 worth of comedy. The performers don’t have to bring anything. They could all fail but they don’t.”

One of the most exciting things for Scott about the future of comedy in New Zealand is diversity.

“There is a worldwide movement away from the brutality of some stand up. You look at Richard Pryor and Eddie Murphy who were getting a huge lot of laughs out of stereotypes but they are also attacking victims. The audience won’t let comedians get away with that. They are far too politically aware and socially aware. I’m excited to see New Zealanders laughing at different things.”