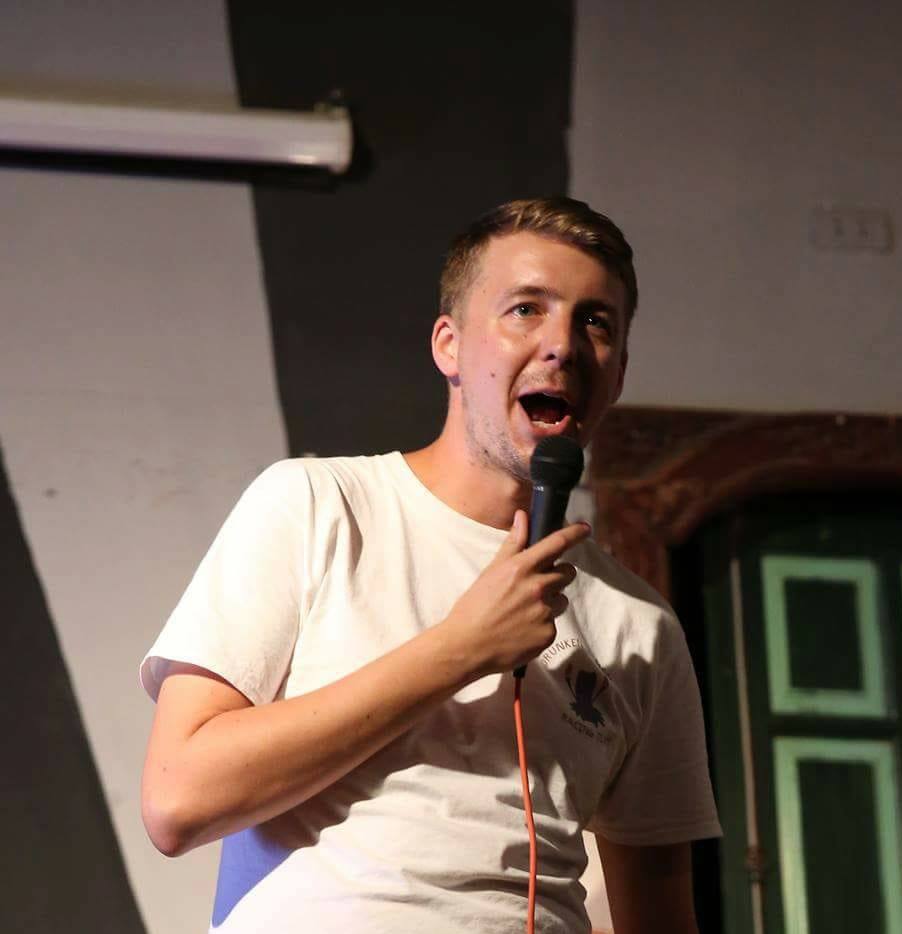 Whangarei-born comedian Oliver Scripps has recently returned to his home town after living in Wellington for a number of years. Now he’s bringing back a slice of the capitals comedy scene with the establishment of the monthly Naughty North Comedy Club held at The Butter Factory.

Oliver describes himself as a ‘grade A shit talker,’ and chatted to On the Record about how he found his way into comedy, the lessons he’s learnt along the way and this one time he found himself naked on stage in front of a crowd of 120 people.

A: How would you describe your style of comedy?

O: I fly by the seat of my pants really. I’ve consistently found the things I think are funny in the dark of the night or in the shower, really aren’t. They might have a good premise, they might technically be a joke, but when you come to an audience with this preconceived idea of what they want to hear, that doesn’t work for me. It works fantastically for some comedians but for me it just simply doesn’t work.

I really try to keep bouncing and try to keep the energy up. If funny falls out of that then that’s great. I always keep in mind that people are literally there to laugh. They haven’t come there to judge or to be  offended. I try to let people laugh and don’t lie to them. Your style is quite a hard thing to describe. It’s like describing your own face!

How did you get into comedy?

I sometimes get quite idea obsessive and one of those ideas was ‘Always do sober what you say you will do drunk. That way you will keep your mouth shut,’ which is Hemingway – somebody quoted by both school shooters and political candidates. I said I was going to do it. The way I’ve gotten into everything challenging or extreme that I’ve done is that I just started  telling people I was going to do it. By the time you tell six people… next thing I knew I was at RAW Meat Monday at Fringe Bar in Wellington.

I did six minutes of borderline homophobic, racist and bigoted material because that’s what I though ‘on-stage funny’ was. I thought the best way to start out was to be like another comedian and unfortunately that comedian was a melange of Ricky Gervais and Jimmy Carr. They both have their places in comedy, I got laughs, people enjoyed it and I got the attention I was obviously craving. A little way down the track I started examining the sets I had been doing.

That was when VK’s was still in Wellington (Vaughan King’s comedy club). I tried to stop being a dick and started actually listening to people when they spoke to me and listening to the crowd when I spoke to them.

Vaughan gave me some great advice, along with other seasoned comics who I respect a huge amount. You should always get feedback, particularly in an art form like stand-up because you can get in your own bubble. If you remember you’ve got your support team, your coach and everyone behind you, then everything is a learning experience.

Where else have you performed?

I would describe myself as a middling comedian of no particular fame. I’ve done big shows, little shows, some in South East Asia and some in Australia. I always found the weirdest shows to be the most fun.

I did a show fully nude because I was abjectly terrified of a whole crowd of people seeing my weird frog body, you know? I did two nights in front of 120 people. It was terrifying but that’s now something I’m not afraid of. I keep running into trials by fire. It was awesome to be backstage with a whole bunch of other guys equally shitting themselves. I was the ‘Cunning Linguist’ and I did comedic poetry or at least tried to.

It’s that weird magnetic energy that I love about comedy and performing arts. When you’re all about to go out and do your own thing but you’re all together. It’s fucking terrifying.

Who are your comedy idols?

I grew up on Eddie Izzard. He was the first comedian who I really dove into. [My family] had his cassette tapes in a box and I would listen to them on repeat. By the time I discovered that in fact he was a transvestite I already loved him so no preconceived notions got in the way. For me watching Eddie Izzard in a beautiful silk Kimono and heels was normality. Then I got into Harry Enfield and Ricky Gervais.

Then the internet happened and suddenly everything was there. I watched everything from Dane Cook to Gabriel Iglesias. I’m an unashamed fan of Mike Myers as a person and Billy Connolly was huge in our family. I’ve essentially just learned from people much older than me and I feel that’s the way it should be with anything that takes a long time to get good at.

What is your favourite comedy television show?

I love series, so things like Brooklyn 99 and It’s Always Sunny in Philadelphia are great. I can binge watch those and have a good time. I lose my mind watching shows like Bikers vs Crazy People and Fail Army. Kids falling down or a dog getting hit by a ball – those little joys that you might actually see in real life.

Scene: There is a van parked in a driveway and an older lady, presumably the mother of the person filming, is walking in front of it with a bag of groceries and a bottle of milk. The person filming honks the horn. Just a real quick honk and the woman throws the milk. The milk just flies off and she’s got this look on her face which is kind of like if my mum got caught farting. You’ve gotta find it . It is one of the funniest things you’ll ever see. If you don’t watch it 10 times in a row you’re not getting it.

What’s something you’ve learnt from doing comedy that you weren’t expecting to learn, either about yourself, or the art?

I think that I can be myself and be likable. There’s a common consistent fear that the true you isn’t a good person or somebody that other people won’t like. The times that have gone best for me on stage are the times I’ve been completely and brutally honest. While that’s not something that produces a comedic effect at that moment, it creates buy-in from the crowd.

Also, just the importance of friendship – you can find friends anywhere if you are pursuing the same drive. The majority of my friends are comedians. I don’t have a huge number of friends so to have people around like that is good. If you want to talk about depression, go into any green room because every single comedian, apart from about three in the world, have had struggles with depression and anxiety. Having people actually reaching out helps with that feeling of self worth. It’s been a trial. If you’re not changing, you’re not learning.

What’s the last thing that made you laugh?

There’s a Kiwi girl with Tourettes Syndrome who has a You Tube channel. She is one of the funniest people I have ever seen in my life. The other day she did a cooking show making pikelets with Tourettes. She was just joyful. I was cackling the ugly laugh. It’s interesting that it’s not always particularly thought out things that make you laugh. It can just be random.

When does most of your material arise?

About half a second before I say it. I used to prepare a set but now I don’t. The Greeks would call it ‘talking to the muse.’ You just fade out and keep that part of your brain turned on and keep bouncing. Sometimes it’s not funny, but if you’re honest then later you can say ‘well that wasn’t very funny’ and move on. Comedy is supposed to be fun. If I start laughing whilst telling a joke then I’m having a good time. If I’ve got a smile on my dial then usually the audience will too.

Are you working on any other creative projects?

I’m writing a fantasy novel trilogy. I am working on three at the same time in the series but that doesn’t help because then you don’t actually end up writing a whole book. I got parts of the lore tattooed on me in the most narcissistic way and then immediately stopped writing.

Do you have any advice for those wanting to start a career in comedy?

Have fun, listen and don’t be a dick. The worst thing you can do is be an asshole backstage or on stage. If people don’t like you, they won’t want to work with you. I wasn’t a very likable person for a lot of the time I was in comedy and on the earth and that holds you back. If you want to do well, be nice, or at least shut your mouth if you’re not going to be. Everything you do and say has good and bad consequences. It’s much harder to fight a bad first impression.

Keep up to date with which comedians Oliver is bringing to Whangarei next by liking the Naughty North Comedy Club page on Facebook.